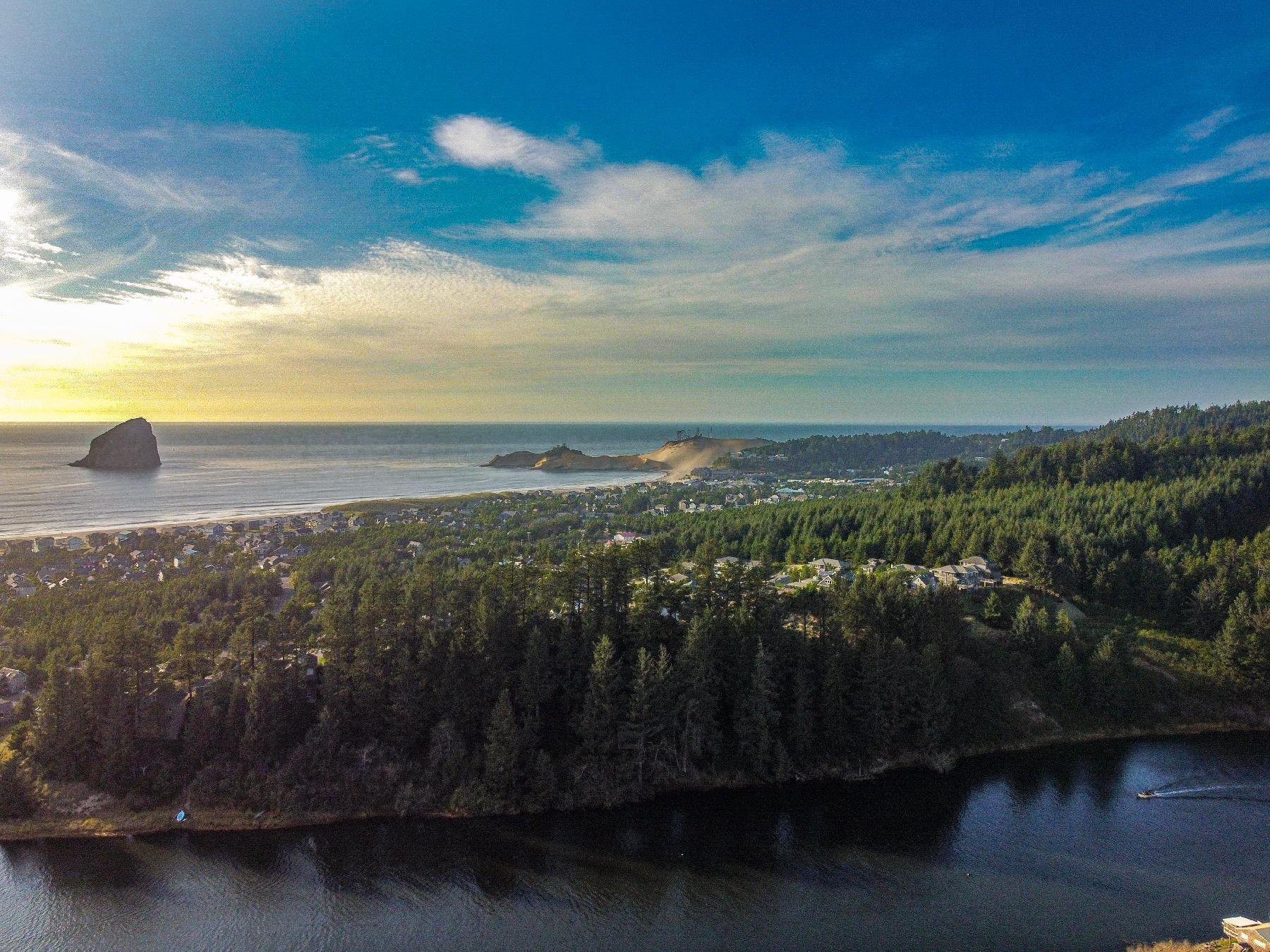 Pacific City, Oregon is located between Tillamook and Lincoln City, right on the edge of the Pacific Ocean. Our small quaint community is removed from Hwy 101, maintaining the pristine beauty associated with Oregon Coast communities of years past.

Pacific City is a small fishing village and is best known as “Home of the Dory Fleet”. The mighty Nestucca River flows through town to meet the Pacific Ocean. Then, adding to the serene charm of our little town, is the splendor of beautiful Cape Kiwanda and the grandeur of Haystack Rock. Miles of white sandy beaches stretch along the shoreline of oceanfront homes and Bob Straub State Park.

If you are event minded, some of the festivities in Pacific City include the Dory Days Festival, 4th of July Fireworks, and Reach the Beach Bike-a-thon. The drive from Portland is about 2 hours and from Salem only about 1 1/4 hours. A small State Airstrip is located right in the middle of town, for those who prefer to fly-in.

Check out our post on local Pacific City dining!

Pacific City has been known for over a hundred years as a quaint fishing village and vacation destination located in a very unique geographical and geological area. Rarely does one see a large river (The Big Nestucca) so close to the ocean shoreline merging with another large river (The Little Nestucca), creating an estuary and habitat for so many of nature’s species. Throw in a small lake stuffed with trout (Town Lake), a spectacular cape (Cape Kiwanda), a pristine beach that you can drive on (Pacific City Beach), a very unique sand spit (Bob Straub Park), one of the most fascinating geological formations off the west coast (Haystack or “Chief Kiawanda” Rock), an airstrip (PC Airport), 8 parks and campgrounds, many fine hotels, motels, shops and restaurants, and a small community of 900 of the nicest people on earth, and you have … Pacific City.

The 3 Capes Scenic Drive is one of the most popular and spectacular stretches of scenery on the Oregon Coast, if not the entire west coast.  Pacific City is the beginning of the 40 mile drive starting with Cape Kiwanda State Park.

Cape Kiwanda is the smallest of the three capes but definitely not the least interesting.  The climb to the top of the cape offers a view of the coastline including Haystack Rock. Continuing north over the hill, you will pass through Tierra Del Mar, a small community of homes lining the pristine beach. This area offers a great view of the north side of Cape Kiwanda.  There are several turn outs and beach access spots for pedestrians and vehicles. As you round the next corner, you come upon Whalen Island County Park. This campground and park is adjacent to the newest Oregon State Park, with 200 acres of rare wetland.  Now you are approaching Sand Lake recreation area with campgrounds and dunes used mostly by off road vehicles.  The scenic route then takes you on a winding drive that moves inland in spots and then to Cape Lookout, another state park, which has camping facilities near the beach. Trails and viewpoints are abundant.

Cape Lookout State Park encompassed nearly every geologic and natural feature found along the Oregon Coast.  The park was named for Cape Lookout, a rocky headland extending one and three-quarter miles into the ocean. An overnight camp is located in a typical coastal rain forest.  A rolling, gently sloping beach provides an ideal setting for ocean activities. Continuing on up the hill you will find a parking lot which is the trailhead to some nicely wooded trails that offer spectacular views of the ocean and beaches.  Take a five mile round-trip hike to the tip of Cape Lookout or a two and a half mile stroll down to the beach.

The next stop is Netarts Bay. The quaint community of Netarts is considered one of the best coastal locales for clamming and crabbing. Just another 3 miles on up the road you will encounter the turnoff to Oceanside, a small coastal village that is a popular stopping place with vacationers.  Just offshore from Oceanside is Three Arch Rocks.  On most spring and summer weekends, you will see hang gliders riding the winds above the rocks until they finally land on the beach.  Three Arch Rocks was declared a National Wildlife Refuge in the early 1900s by President Theodore Roosevelt. It is the home for many types of bird life as well as an area that is frequented by sea lions. When you reach Bayocean, don’t miss reading the signs which tell you the brief story of the ghost community, now gone, that existed there 35 – 55 years ago.

Turning left from the bay, the route climbs up through forested hills toward the entrance to Cape Meares State Park. Within easy walking distance from the Cape Meares parking lot is the legendary Octopus Tree, a Sitka spruce that sends six huge trunks into the sky.  Also in the vicinity are Cape Meares Lighthouse and a coastal seabird nesting area that is part of a U.S. Fish and Wildlife Preserve.  As you follow the drive, you will find yourself skirting the southern edge of Tillamook Bay, looking across the water toward Bay City and Garibaldi.  The bay, which has many commercially harvested oyster beds, is a vital habitat for much of the county’s fish and wildlife. As you drive on toward downtown Tillamook on Third Street, you will stop at the intersection of Third and 101, turn right and follow the highway back to Pacific City. The small communities alone are worth the drive! The round trip driving time is about 2+ hours not counting stopping time.  But plan on a whole afternoon to take in all the beauty.
And don’t forget your camera and plenty of film…